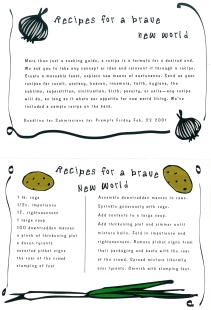 It is the second week of class. Students’ initial enthusiasm about working with Syrian human rights activists and North African students on confronting ISIS recruitment efforts has turned to apprehension, confusion, and concern. (See my previous post on the teaching challenges of this topic and approach.) The political theory and regional histories have both emphasized the complex reality of the work and seemingly positioned such work as impossible.

As a teacher, it is at these moments that I have often turned to the drafting of writing prompts, which is an important way to shrink the project into a manageable size. The work becomes solely focused on that initial conversation with a community partner.  While initiating a conversation with communities who are in Syracuse and in North Africa might seem particularly difficult, the process of using writing prompts as a tool to explore hidden assumptions remains pretty much the same.  In general, I ask students to develop the prompts through a series of drafts.

1. The Prompt as Summary of Assigned Readings

As students begin to complete the assigned readings that provide a theoretical framework for the class, I ask them to draft a writing prompt that will begin their conversation with one of our community partners. Almost by default, the students tend to draft prompts that echo the terms of assigned readings and, really, are versions of writing assignments they might receive in other classes. We use these prompts to talk about the difference between ways of speaking in an academic community versus “everyday” communities. They are then tasked, in groups, to keep the intellectual framework in class intact but to revise one student’s writing prompt into more ordinary language. I also stress the variety of possible genres – poetry, memoir, photography, etc.

2. The Prompt as Rhetorical Invitation

As the students begin to revise a prompt for an “everyday” audience and share them in class, the language begins to reveal how they imagine their relationship to the community. Students often imagine themselves in the position of providing a service to an “impoverished community.” The prompt questions will ask partners to share hardships – not successes, positioning the community partner’s neighborhood as full of problematic issues – not as possessing attributes of collective insight and actions. Students are then asked to return to drafting the prompt, paying attention to how the community is framed.

3. The Prompt as Equal Invitation

As prompts are being revised into gestures of respect toward the community, the students must also turn their attention to choosing a topic which can begin to open up a dialogue with the community. The goal is to frame a conversation where the full life and school-based experiences of all those involved are seen as valuable to the work at hand. In a university environment premised on “expertise,” finding appropriate language to create this space is a particularly challenging task.

Once the language of the prompt is completed, design becomes a key issue. Handing out photocopied sheets full of blank ink shows disrespect for everyone in the project. For that reason, once the writing is done, images need to be found that echo the stance of the prompt. As with all other elements of this process, choosing an image is also an opportunity for students to question their cultural assumptions about the community and their own relationship to it. Images of “urban poverty,” a typical first suggestion, might ultimately be replaced with images of collaboration, collective work, and visions of progress.

Finally, any completed prompt will be reviewed by the lead community partner – the ally with whom the project was initiated. This might involve the partner attending a class session to point out where the language/images could be unintentionally insulting or misrepresenting the community’s self-image. This is a vital step and, as with all other moments in this process, demonstrates what it means to establish a partnership in terms of equality and respect – where everyone is working together on the issue to be addressed.

There is one final point to make about writing prompts: students should not be the only source. Rather, prior to the first common meeting, each partnering group should develop their own prompts. This ensures that everyone is in the position of “asking questions” and that each group goes through the same process of testing their cultural assumptions about other communities while practicing language that invites full participation by those communities. (As the partners take on such work, I often find it useful to be there as well.) The community’s creation of prompts may not be as time intensive as the students, given they will often have life responsibilities, but it is just as important.

When all the partners finally talk as a collective, one prompt from each group will be used to begin that conversation. This process can be as organized as directly assigning the prompts to specific selected groups. It can be as improvised as allowing individuals to choose a prompt then forming groups according to what prompt was selected. In both cases, the opening session should include individuals reading the results of their work – enacting the moment when community dialogue begins. (If possible, all the writing produced should be collected, as it provides insight into how individuals are imagining their emerging community as well as material for any possible publication.)

As I write this, my class and our community partners are still actively producing their prompts, exploring cultural assumptions, and thinking through that opening moment of conversation. It is difficult work, often frustrating to students. Still, my students also seem to be finding comfort and security knowing that the immensity of the work to come can become as focused as the conversation through which the work will emerge.